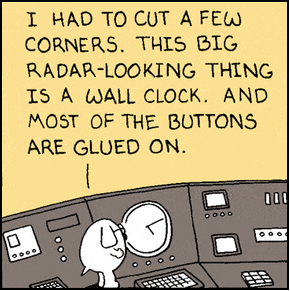 "Unfortunately, due to budget cuts, we are canceling art, music and dance. Please evacuate the auditorium before it's bulldozed into a mini-mall."
— Principal Skinner, The Simpsons, "HOMR."

Somebody, such as a cheapskate or someone in financial trouble, needs to save money desperately. He does so by conserving his money ridiculously by refusing to spend any money or buying extremely cheap items.

If the company used to be generous, but has since downgraded to cheaper versions, or "BYO", that's a sure sign that they're in some kind of financial trouble. Bonus points if the things they're being stingy with are essential (and already cheap—or in some cases just paid for) items such as pens or pads of sticky notes.

A subtrope of The Scrooge. Often result of a Money Fetish or No OSHA Compliance. Compare Thrifty Scot and All Jews Are Cheapskates. Related to Poor Man's Substitute, though here, the substitute is actually rich. See Doom It Yourself and You Get What You Pay For for examples of the possible consequences. Supertrope of the Kitschy Local Commercial, though that one is usually justified in that the commercial is most often for a small business which doesn't have the budget for high-quality ads that larger corporations do.