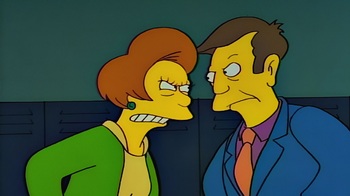 After a disastrous field trip, Edna and the teachers agree to a strike as they have had it with Skinner cutting the school's budget to the point that he's selling the kids' futures shortnote even though the only students who actually have a future are Lisa, Martin Prince, and the members of The Superfriends science club from the episode "Bart's Comet". Students like Bart, Ralph Wiggum, Nelson Muntz, and the three bullies — Dolph, Jimbo, and Kearney — don't (unless Bart actually goes through with being a Chief Justice of the Supreme Court as seen on "Itchy and Scratchy: The Movie") and everyone else is average at best. While Bart revels in the strike by making mischief, Lisa is suffering from not being in a classroom setting, Milhouse gets tutored and becomes smarter than he thought possible, and the PTA decides to hire neighborhood people (one of which is Marge) as scab teachers.