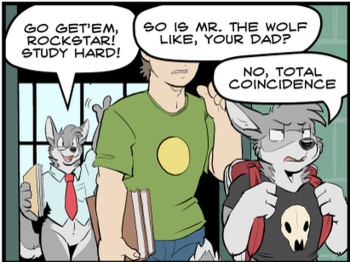 Many kids have Amazingly Embarrassing Parents, but at least when they're at school, they can avoid that issue. They can have friends, be cool, and never let anyone know that their parents still pack their lunch for them. ...At least, that's when their parents or another embarrassing relative doesn't happen to work at their school. If they do, there'll be no end to the humiliation.
Advertisement:

They may be given special treatment in class or when being disciplined, which makes the other students feel unfairly treated. Their relative may not be able to act professional around them, constantly making it clear they're related and calling them nicknames like "sweetie" in front of their friends, bullies, or, heaven forbid, their crush. Even if the relative is relaxed about the situation, teachers and other school staff often have a reputation of being generally uncool, and the kid won't want that association.

In Real Life, schools will usually make a point to avoid this because of worries over favoritism and professionalism (and concern for the child's social development). If a teacher has a kid in the school, they will almost always make sure to place that student in a different class. The exception is if there is only one teacher in the school for that class, which is common for non-core subjects such as Gym, Art, or Music class.

Compare Homeschooled Kids, which is about parents teaching their kids at home. See also Teachers Out of School.