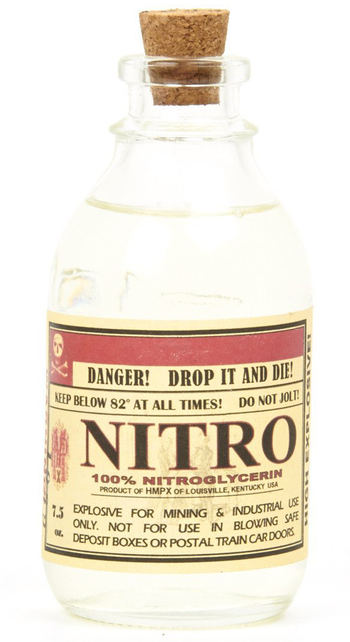 DANGER! DROP IT AND DIE!
Sarah Jane: Aha! This looks like it! [throws a box to the Doctor, who freezes in place] What's wrong; not enough?
The Doctor: Sweaty-gelignite-is highly-unstable. One good sneeze could set it off. [carefully puts the box on the floor]
Sarah Jane: Sorry.
The Doctor: No sign of any detonators or fuses?
Sarah Jane: No, no, nothing else. Perhaps he sneezed?
— Doctor Who, "Pyramids of Mars"
Advertisement:

There are powerful explosives and can blow up almost everything. But Hollywood gives it a nasty drawback: anything can make it explode. Anything. You have to be super-careful or it will blow up. Or maybe it blows without any apparent reason.

Some Real Life explosives really have a hair trigger, some...don't. Note that most explosives in fiction are not depicted this way. Usually in fiction, a plunger or a similar device (e.g. with a blasting cap, fuse, Plunger Detonator, etc.) is used to safely blow up explosives. But also in fiction, they get the volatility of explosives wrong, especially TNT and dynamite.

In video games in general, Exploding Barrels can be usually detonated even by punching or striking them with any melee weapon. Grenades and flamethrowers also have a tendency to explode when the person carrying them dies, especially in strategy games.

Subtrope of Stuff Blowing Up and The Last Straw. Supertrope of Nitro Express. Also see Explosive Stupidity when someone doesn't know this. This applied to a car intentionally is Molotov Truck, and unintentionally is Every Car Is a Pinto. Compare/contrast Made of Explodium, in which something that should not be explosive explodes anyway. If the compound explodes with ridiculous intensity rather than ease, see Ridiculously Potent Explosive. If a nuclear weapon is treated like this, it's Artistic License – Nuclear Physics. In comedic works, the volatility of stuff is directly proportional to how funny the consequences of the resulting explosion will be.