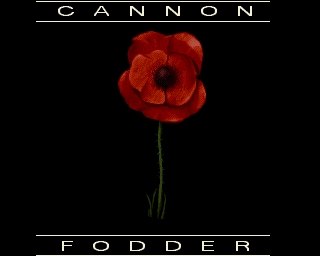 Cannon Fodder is a action-strategy Shoot 'em Up game from Sensible Software released in 1993, originally for the Amiga, in which the player commands between 1 and 8 soldiers on a series of missions like "kill all enemies." It is remembered for attempting to avert Do Not Do This Cool Thing — your soldiers die horribly and in droves, each adding a tombstone to the pre-mission screen, and the game manual openly states that "war is a senseless waste of lives and resources."

A Mission-Pack Sequel, Cannon Fodder 2, also by Sensible Software, was released in 1995. An impressive Game Boy Color port, with entirely recorded audio and FMV-based menus, was released in 2000.

to be made by Russian developer GFI for PC and Xbox 360. It was released in different parts of the world in 2011-2.

(though be aware that it is the somewhat inferior PC port, and not the Amiga original).

Not to be confused with Canon Fodder. Or the third animated short film from Memories.

A partial list of names the dead soldiers may have that the game displays at the end of missions.

A partial list of names the dead soldiers may have that the game displays at the end of missions.