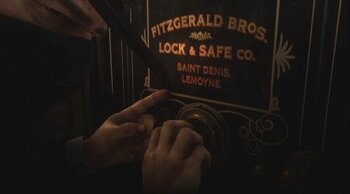 Now in minigame form!
"It's about fitting into a culture with its own rules and hierarchies. It's a world where bank robbers are the rock stars, con artists are the snobs, car thieves are the blue collar guys... and safe crackers are the artists."
— Burn Notice, "Scatter Point"
Advertisement:

A safe is a box designed to house valuable items, protected with a lock to prevent unauthorized access to the contents. In the pre-digital world, people tended to load safes protected by combination locks with tons of money, important documents, and fabulous jewelry. (They did in popular media, anyway.)

Naturally, other people would sometimes want the fabulous loot hidden away in someone's seemingly impregnable safe. These people won't be given the combination to the safe's lock, as they're usually enemies of the owner. They may not be able to steal the combination. Breaking into the safe with sledgehammers or just stealing it outright isn't advisable since the safe is probably in an enemy's house, protected by guards.

Our criminal or spy isn't out of luck, though. Combination locks were driven by a mechanism that involved tumblers, devices that would spin into place as the combination lock's dial was turned. Someone with very, very good ears (or a doctor's stethoscope) could hear the tumblers spinning and know by sound when they had fallen into place. At least, that's what Hollywood think they did.

It's a Dead Horse Trope now - but survives due to the Grandfather Clause in older material, and is used for comedy occasionally but never straight. In modern settings it's been largely replaced by Password Slot Machine.

In a digital world, valuable information is rarely stored in physical formats - well, except backups of printed materials like magazines etc. - digital publishing, despite the name, also produces physical magazines. Other valuables are likely to be protected by safes using electronic locks, buried deep in highly inaccessible vaults. Even when a safe does have a combination lock... well, modern combination locks are much better thanks to new materials and manufacturing methods. While it is possible to break your average safe open with the right tools, it'll usually take hours and will involve cutting open the safe (with a slight risk of damaging whatever's inside).

Typically this trope is only played straight in older media (and sometimes parodies, homages, or remakes of said older media). Otherwise, the Safecracker's role is most likely to be played by a main character equipped with cool gadgets or a computer hacker who needs to work inscrutable magic on an electronic lock.

Not to be confused with The Cracker, a type of thief who steals using computers.