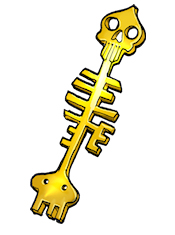 "You may find the keys useful. They open 90% of the world's locks."
— Q, The Living Daylights
Advertisement:

A skeleton key (also known as a pass key) is a master key often used by locksmiths, that will open any lock in the set of locks for which it is made. In fiction, a skeleton key will open any lock or Locked Door, period, and will often be shaped like a skeleton, skull or bone (partly a Sight Gag and partly a visual clue as to the key's purpose).note This has confused generations of foreign viewers, as very few languages' terms for "skeleton key" actually involve a "skeleton" part. More realistic examples have a full ring of them, one for each type of lock.

Subtrope of Cool Key. Compare Interchangeable Antimatter Keys (which this is one step up from). Not the same as a Skeleton Key Card (which is just jimmying the lock with a piece of plastic). For the supernatural power to open any lock, see Open and Shut.

Not to be confused with The Skeleton Key.