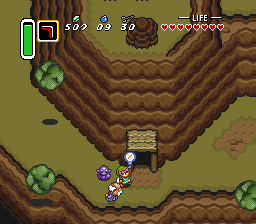 Not even looking into the mirror at an angle will show you who is doing this.
Advertisement:

A common form of obstacle in video games, usually in mountainous areas, are boulders, balls of snow or even mook attacks coming from off screen, that pester the Player Character until they are close enough to the source, at which point the obstacle simply disappears without explanation. Usually at least two of the following conditions are in play:

The name derives from guerrilla warfare, referring to how the obstacle tends to attack in set amounts before retreating or stopping altogether.

Related to Stalactite Spite. Not to be confused with Homing Boulders, which deals with how the boulders actually hit you.