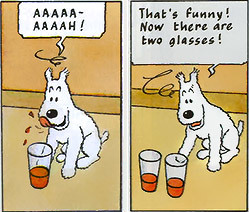 Billy Clanton: Why, it's the drunk piano player. You're so drunk, you can't hit nothin'. In fact, you're probably seeing double.
Doc Holliday: [takes out a second gun] I have two guns, one for each of ya.
— Tombstone
Advertisement:

Booze makes you see double (or triple, quadruple, or more, especially if Rule of Funny is in effect), and sometimes the drunk will assume both of whatever he's looking at are real.

A variant has the drunk afflicted with double-vision trying to interact with "the one in the middle" (although since most people only have two eyes, normally you'd only see two of whatever it is).

For hallucinating things that actually aren't there while under the influence, see Pink Elephants.