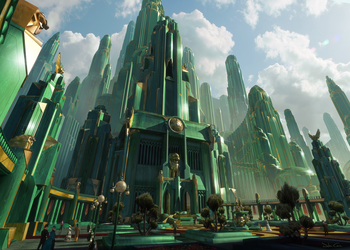 They don’t call it the Emerald City for nothing.note Concept art by Dylan Cole
Celia: How about this one? Do you think this will get his attention?
Vaarsuvius: I would venture a guess that [Roy] might be tired of the color blue by this point.
Celia: It's the only color they sell here.
— The Order of the Stick #298, "The Future is Forged in the Fires of Today"

So there's a place. And it only has one color. Not sixty four, not thirty two, not four, just the one color. It's everywhere. And you can't run away from it. Everywhere you go, the people will wear clothes and have hair that reflect this color scheme and no other. They must really like it.

Like Colour-Coded for Your Convenience, this trope exists mainly so that the audience knows which character belongs to which nationality. Tends to be prevalent particularly with drawn artwork where color distinction is most obvious, and thus the trope is most helpful. It also shows up from time to time in early Hollywood technicolor films- where color was the newest, greatest thing out there, and the cinematographer was going to make damn sure that the audience knew it was there.

Definitely one of those tropes which you just shouldn't think too hard about. Just enjoy the pretty, shiny colors- you know you want to.