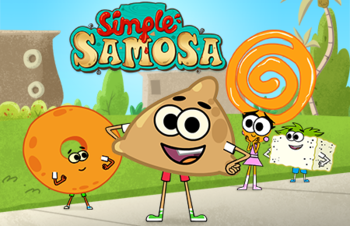 These four friends have arrived to change the taste of your life!note From left to right: Vada, Samosa, Jalebi, Dhokla.
A little spicy, a little crisp, and a lot of fun
With me around, it's a guarantee life is always yum!
It's because I'm simple
It's because I'm really cool
Everybody loves me and I love them too
And I'm happy just doing whatever I do...
It's because I'm Simple... Samosa!
—English version of the show's theme song
Advertisement:

Simple Samosa is an Indian animated series created by Sanjiv Waeerkar and produced by Ice Candy. It premiered on Disney Channel India on May 14th, 2018 and started airing a second season in early 2020.

In the fictional Anthropomorphic Food town of Chatpata Nagar live four excitable young friends. Samosa is enthusiastic, Jalebi is level-headed, Vada is young and trusting, and Dhokla is kind, cautious, and caring. Together, they play, explore, and save Chatpata Nagar from unexpected trouble.

As of March 2020, the series has been made available for viewing on Disney+ as one of its launch titles in India. Originally only the first 30 episodes were available on the service, which was rectified in December 2021 when the rest of the series was added. Before that, episodes were also put on JioCinema.

Has a character sheet and an index of episode recaps.

Samosa: It's because I'm simple-
Jalebi, Dhokla, and Vada: Simple, the song is over!
Samosa: Heheheh... erm, sorry!

Dhokla's tongue comes out of his mouth. Samosa asks him to put his tongue back in his mouth.

Dhokla's tongue comes out of his mouth. Samosa asks him to put his tongue back in his mouth.