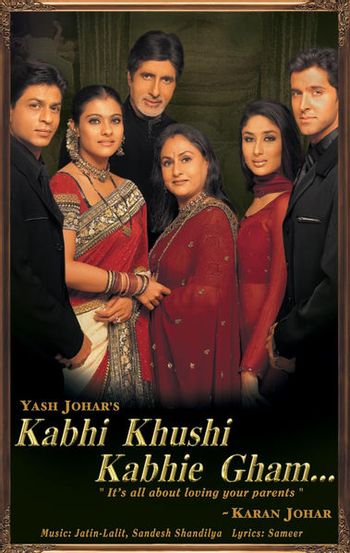 Released in 2001, Kabhi Khushi Kabhie Gham (Sometimes Happiness, Sometimes Sadness) was a commercially successful Bollywood film with an All-Star Cast, directed by Karan Johar. The film deals with the wealthy Raichand family. The oldest son, Rahul (who is adopted and has much angst about this fact), is disowned after eloping with an unsuitable girl. Ten years later, the younger son, Rohan, learns the truth about his brother's disappearance and sets out to reunite the family.

Opinions on this movie are sharply divided. For some, it's quintessential Bollywood, while for others, it's a Cliché Storm rife with Wangst. Either way, it's worth a watch.