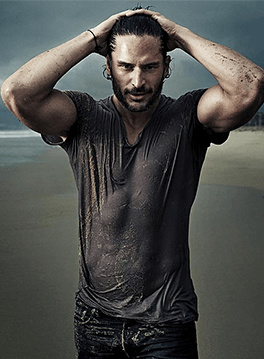 Learn to wash your clothes while still wearing them and look sexy while doing it!
On seeing that the fish had been cooked, the girls emerged from the pool, their fishing done, with their thin white dresses clinging to their flesh so as to conceal almost nothing of their dainty bodies.... The King, the Count, and the others who were waiting upon him had been eying the girls most attentively, and each of them had secretly much admired their beauty and shapeliness, as well as their charm and impeccable manners, but it was upon the King that they made the deepest impression. Indeed, he had studied every part of their bodies as they emerged from the water, that if anyone had pinched him at that moment he would not have noticed.
— Giovanni Boccaccio, The Decameron, Day X, Story 6
Advertisement:

Very common form of fanservice when characters' clothes get wet, and often clingy and see-through as well. It can be caused by rain, spilled drinks, throwing someone into a pool, playing in a fountain and so on.

With men, it's becoming quite popular to have this instead of a Walking Shirtless Scene when being entirely shirtless would be inappropriate. For women, a soaked shirt will often lead to either a Lingerie Scene or a case of Vapor Wear, depending on what is or isn't worn underneath it.

This can be seen fairly often in Music Videos, when the artist performs in a "rain storm", or writhes around in a large water container (often some huge drinking glass).

A Super-Trope to Wet T-Shirt Contest and the Bollywood-specific Wet Sari Scene.

After getting out from the rain, Paige's blouse is drenched and she asks Owen if he can see her bra, which he reluctantly admits yes he can.

After getting out from the rain, Paige's blouse is drenched and she asks Owen if he can see her bra, which he reluctantly admits yes he can.