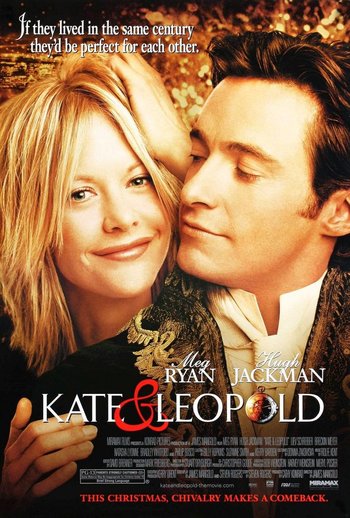 Imagine your future happiness is bound by fate to one man... a man who is dashing, handsome, and chivalrous, and who would do anything in his power to make you happy.

The only problem is he lived and died over a hundred years ago.

Directed by James Mangold (who co-wrote the screenplay with Steven Rogers), Kate & Leopold is a 2001 romantic comedy about Leopold (Hugh Jackman), a 19th-century Duke who must marry to restore his family's fortune and Kate (Meg Ryan), an ambitious 21st-century businesswoman who is focused on her career.

Stuart Besser (Liev Schreiber) travels back in time from the 21st century to 1876 via a time portal to view the building of the Brooklyn Bridge and investigate Leopold's invention of the elevator. Leopold is suspicious of Stuart and pursues him resulting in an accident that brings them both back to the 21st century.

After an unfortunate mishap involving an elevator, Stuart is hospitalized leaving Leopold alone in his apartment where he meets Kate, who lives on the floor below and is Stuart's ex-girlfriend. Then Kate's brother, Charlie returns and befriends Leopold ensuring constant contact with Kate.

Naturally, there are complications. Leopold is the Duke of Albany but is too honorable a man to make up a story about his origins. In addition, since Leopold left his time before he invented the elevator, all the elevators in New York start malfunctioning. Although he knows Leopold must return home to fix the space-time continuum, Stuart's ramblings about time travel while hospitalized result in his transfer to a mental hospital.

And thus hilarity and romance ensues.