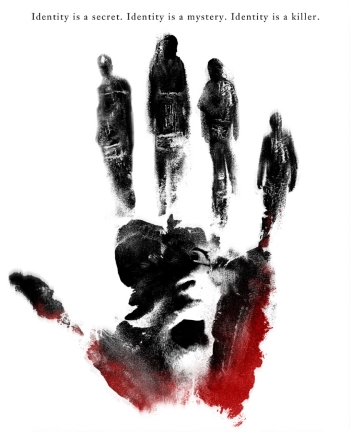 "As I was walking up the stair
I met a man who wasn't there
He wasn't there again today
I wish I wish he'd go away."
"Where did you learn that poem?"
"I made it up."
— Dr. Malick and Malcolm Rivers, respectively
Advertisement:

Malcolm Rivers (Pruitt Taylor Vince) is a psychotic killer awaiting execution for the grisly murders that took place at a motel. His psychiatrist Dr. Malick (Molina) finds a new piece of evidence: a journal that may explain what actually happened that night and could exonerate Malcolm of the murders. With this evidence in hand, a new hearing takes place in which Dr. Malick must persuade the Judge to spare Malcolm.

Meanwhile, ten strangers arrive by chance at a motel run by the manager Larry Washington (John Hawkes) in the middle of the Nevada desert, each with their own agendas. The ten strangers are limo driver Ed Dakota (Cusack), who's chauffeuring '80s TV star Caroline Suzanne (Rebecca De Mornay); Samuel Rhodes (Liotta), a cop transporting convict Robert Maine (Jake Busey); Las Vegas sex worker Paris Nevada (Amanda Peet); newlyweds Lou and Ginny Isiana (William Scott and Clea Duvall); and the York family, George (John C. McGinley), Alice (Leila Kenzle), and Timmy (Bret Loehr). When bodies begin to pile up one by one with little explanation, the survivors must discover what connects them in order to save themselves from their fate.

This movie depends on a major Twist Ending. Proceed with caution.