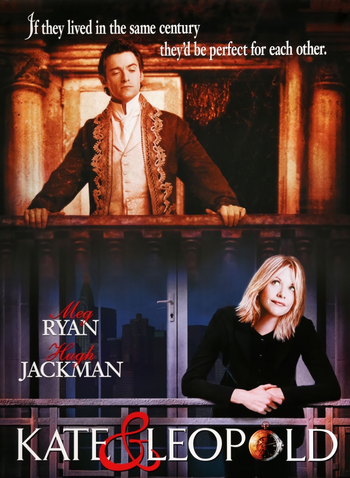 Bill: We gotta go. This is a history report, not a babe report.
Ted: But Bill, those are historical babes!
— Bill & Ted's Excellent Adventure
Advertisement:

Time Travel provides all kinds of possibilities for a romance arc: some of them comic, some of them tragic, and some of them bittersweet. As a comedy trope, time travel can result in a culture clash between two otherwise suited people, since different times have different manners and mores. More dramatically, a time travel plot may force a protagonist to make a decision between returning home or staying in a different era. Time travel can also serve as a force which reluctantly separates the couple, if one must return to his or her original time. Time travel can sometimes result in the ultimate Long-Distance Relationship, if the couple tries to make it work despite the time barrier.

In some cases, Love Transcends Spacetime, and a couple separated by time are able to be reunited simply through The Power of Love. Alas, this is not always the case with a Time Travel Romance. Sometimes separated lovers are separated forever. In other cases, they have to go through a great deal of effort (using magic or science) to be reunited.

Of course, separation isn't the only possible source of romantic drama in a time travel plot. A Time Travel Romance may lead to Time Travel Escape, if the object of affection needs to be rescued from a historically-necessary but unfortunate death. Love across time may also lead to My Own Grandpa, which could be played for either comedy or drama.

In many time travel stories, the cross-time romance is a subplot, rather than the main story. If the romance is the main plot of a work which involves time travel merely as a means of uniting, challenging, or separating love interests, then you're likely dealing with a Paranormal Romance. See also Reincarnation Romance and Eternal Love, which describe other methods of extending a romance arc across time.

A strangely common subtrope involves one lover attempting to use time-travel in order to save their beloved from some kind of fate, repeating the same series of events for what is often implied to be hundreds or even thousands of times without giving up, all in the name of love.

Closely related to Age-Down Romance, which also involves two characters, who would otherwise be too chronologically distant, getting brought together through supernatural means.