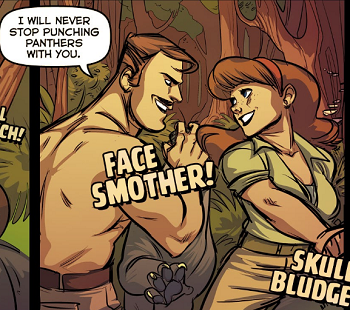 "I was thinking that if you're still alive when I get back from work tonight... maybe we could go out to dinner or something?"
— Lindsey, Lucky Number Slevin
Advertisement:

Most stories build up the romance between love interests in between the bits of action, when the characters in question can set their troubles aside long enough to focus on one another. Some stories, however, either don't care enough to separate the romance from the action, or simply don't want to. Typically played for comedic effect, though occasionally done in a dramatic manner, this is when the lovebirds in question will continue to flirt and romance one another even while the bullets whiz past them. More specifically, this trope is characterized by both the presence of a danger to the protagonists/love interests, and the protagonists' ambivalence to the danger's presence while focusing on their romantic relationship.

Depending on the circumstance, this can be used to serve a variety of purposes. Quite frequently, this can be employed to show, in a dramatic fashion, how much the characters care for one another by declaring their love or by sharing The Big Damn Kiss during the height of a climactic battle. Equally as common, flirting under fire is used for comedic effect by having the characters flirt and be cute with one another during a tense moment of action. The comedic application of this trope can also be used between two villainous lovers, often to illustrate their evilness by taking pleasure in death and destruction.

This serves as a case of Truth in Television, since the adrenaline rush brought on by imminent danger could enhance romantic desire, and although it strains credulity to see two characters lock in a kiss during a firefight, it can happen.

Compare Glad-to-Be-Alive Sex, as well as Coitus Uninterruptus, where the lovers aren't aware of a disturbance until they've already begun romancing one another. Sister Trope to Casual Danger Dialogue, where characters crack jokes and one-liners under similar circumstances. Completely unrelated to Flames of Love, although they may overlap.