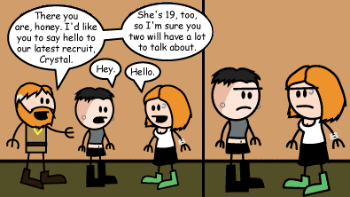 Everyone has heard of Love at First Sight. Two people meet and instantly one or both falls in love. Happiness ensues, except when it doesn't. On the other hand, sometimes people despise each other from the first moment they meet, often before they've even really had a chance to get to know each other. That is Hate at First Sight. When it's mutual, there will be lots of blatant antagonism. When it's one sided, the target of hatred might be completely confused.

Maybe it's their instincts giving them a hint that they just can't get along with this person or maybe it's just something random and unfounded, but either way one or both characters will simply never get along or at least not without a great deal of trial and tribulation. While you might think that this trope would be particularly common between a hero and a villain, it's actually quite common between two good characters as well.

If for some reason the characters wind up in a long-term relationship, it may be The Masochism Tango. If they ever start liking each other, they will probably have Belligerent Sexual Tension or become Vitriolic Best Buds. Expect a Slap-Slap-Kiss to be the moment when this switches.