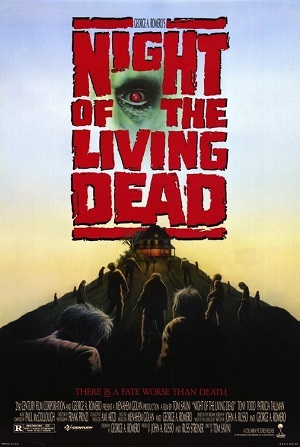 The first remake of Night of the Living Dead (1968), directed by Tom Savini.

Two siblings are attacked by zombies when they go to visit their mother's grave. The survivor of the duo, Barbara, makes her way to a farmhouse that starts housing others like her. However, their solace is only temporary, and they are are soon besieged by the living dead.

The film was created, in part, as an attempt to restore the copyright of the original film, but Romero and Russo also took the opportunity to improve on some of the weaker elements of the original film, and to produce a more cinematic experience. The film did poorly critically and commercially, but has gained a cult following over the years.