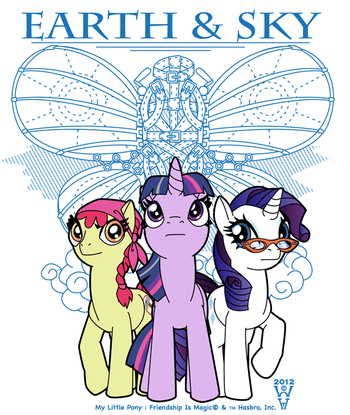 is the sequel to the My Little Pony: Friendship Is Magic fanfic Windfall, and takes place about three years after the events of that story.

Twilight Sparkle (now Dr. Sparkle) manages to find the time in her busy schedule to visit her friends in Ponyville. Among other things, she finds there's a bit of tension in some of her friends' mixed-race families: Pinkie Pie's got a Pegasus daughter (and another little winged bundle of joy due any day now) that she's been run ragged trying to keep up with, young Pound Cake recently got into a fight with some of his Pegasus friends who were making fun of his sister Pumpkin (a unicorn, and therefore ground bound), and even the Apples are a bit sorry they can't keep up with Fluttershy and little Windfall. But Twilight's been thinking this problem over and gets an idea for an invention that, with the help of Apple Bloom and Rarity, could be just the thing to solve it…

Of course, what begins as a simple project quickly spins out of control once word gets out, and soon Twilight and her friends are caught up in another crazy misadventure, this one involving old foes, new loves, and the biggest aerial race in all of Equestria.

Now has a sequel, Movie Magic.