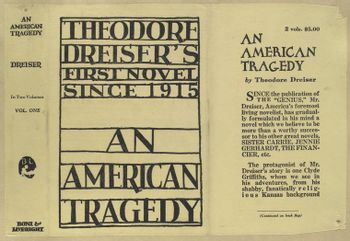 Theodore Dreiser's An American Tragedy was first published in 1925. A Doorstopper, this long book chronicles the downward spiral of Clyde Griffiths, a poor young man trying to escape his roots but finding himself facing hurdles on account of his class, background and education at every step of the way. He eventually ends up in a Love Triangle between the wealthy Sondra Finchley and the poor Roberta Alden. As the title states, it eventually ends in tragedy.

The story was based on a real-life incident, the murder of Grace Brown by Chester Gillette in 1906

. In many ways it anticipates the "true crime" novels with its detailed realism, gritty descriptions, lack of sentimentality and emphasis on larger social forces. However, the prose style is closer to that of Émile Zola than pulp fiction.

The story had a major impact in its time and was repeatedly adapted for film and theatre. In addition to this, the story itself has inspired many a Whole-Plot Reference and Shout-Out to the infamous "boat scene".

An official film adaptation appeared in 1931, directed by Josef von Sternberg; however, Executive Meddling resulted in a film neither Sternberg or Dreiser liked. The story was adapted again (albeit with the characters' names changed) as the 1951 film A Place in the Sun, directed by George Stevens and starring Montgomery Clift and Elizabeth Taylor. Other works that echo its story include Sunrise, Match Point, and A Kiss Before Dying.

The novel entered the public domain in Australia, Canada, and New Zealand in 1996, in the EU (except Spain) and UK in 2016, and the US in 2021.note Australia, Canada, and NZ then had "life plus 50" terms (Dreiser died in 1945). NZ still has that term; Australia and Canada have since changed to "life plus 70", but Australia didn't make it retroactive, and Canada didn't change until after the copyright would have expired anyway. Before it harmonized its copyright laws with the rest of the EU in 1987, Spain used "life plus 80", and it retains that term for works by creators who died before that year. As for the US, the copyright term from works of that era is based on the date of publication, and is 95 years.

Since the copyright has expired and this work now falls into the Public Domain, all spoilers are unmarked as per policy. You Have Been Warned.