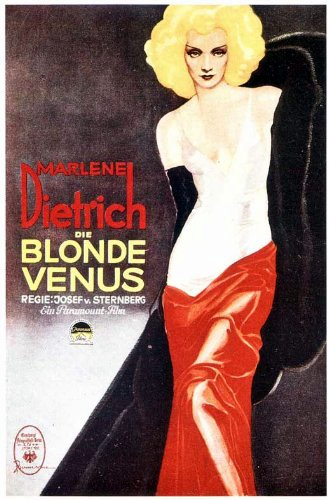 A 1932 musical drama film directed by Josef von Sternberg, and an excellent example of what a movie could do in The Pre-Code Era that would become impossible a few years later.

Marlene Dietrich stars as Helen, a German actress and singer who meets and marries American scientist Edward Faraday (Herbert Marshall). She moves to New York with him and gives birth to a son, Johnny, while Edward works on his (unspecified) dream project. But five years later, Edward discovers that the chemicals he's been working with all these years have poisoned him, and he will die unless he goes back to Germany to get an experimental treatment. The trouble is, Edward doesn't have the money.

Helen talks her reluctant husband into letting her return to the stage to raise the funds, and she gets a job at a cabaret, where she's billed as "The Blonde Venus". There she attracts the interest of millionaire Nick Townsend (Cary Grant), and begins to accept money and gifts from him while pretending to her husband that it's coming from her employer. When Edward finally leaves for Germany, Helen realizes that she has feelings for Nick, too, but insists that she has to return to her husband when he's well. Unfortunately, Edward returns from Germany earlier than expected...