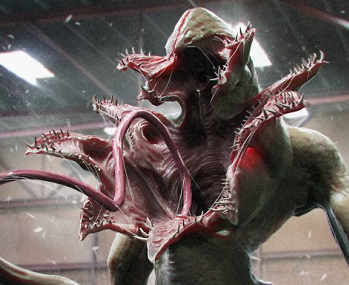 A rose with any other fangs...
His head is that of a deformed snake with dead black eyes, its jaws split so that when it opens its many-fanged, five-jawed maw it looks like the bloom of an unholy and monstrous flower.
—Description of Setrous, Demon Prince of Heretics, Dungeons & Dragons: Elder Evils
Advertisement:

When a monster has a circular mouth with rings of teeth along the inside, that's known as a Lamprey Mouth. This is not that.

This is when a monster or character has a mouth that opens like a grotesque blooming flower, often with mandibles or other "petal"-like appendages opening up in different directions. Oftentimes, there may or may not be something resembling a Lamprey Mouth on the inside, but that's not always the case. When used, it is more often than not meant to resemble Vagina Dentata.

Not to be confused with having an actual flower for a mouth, nor about flowers with faces and mouths.

Compare Man-Eating Plant, which tends to have a big mouth. Sub-Trope to Monster Mouth. Not to be confused with Hanahaki Disease.