I Owe You My Life 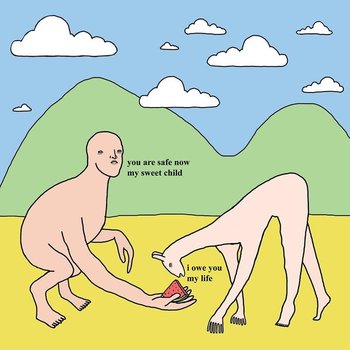 Not even H. R. Giger would have represented it better.
Arnold: Grandpa, I have a problem.
Grandpa: Let me guess — you saved some guy's life, and he's trying to make it up to you by being your slave.
— Hey Arnold!

One day, Bob is strolling down the lane minding his own business. Then BANG! One Diving Save later, he has some guy pledging his loyalty to repay him for saving his life.

The concept of owing one's life to another (often referred to as a "life-debt") is simple. Someone saves your life and you must repay them, especially if you live by a strict honor code. Often it is the case that the person who saved you doesn't want someone tagging along or that the person you saved didn't want to be saved and therefore indebted to you.

Most times the person you saved becomes part of your traveling party or group of friends, and he'll stay around even after repaying you for saving him. The easiest way to repay this debt is saving your savior's life, but sometimes you can instead do something like help them get home, defeat the villain, or serve them for a period of time.

If the rescued was formerly a villain in a series with a somewhat serious tone, expect them to cash in the debt in the most literal way possible, because Redemption Equals Death. A rescued animal might pay its debt back too, in fiction.

When two characters owe each other their lives like this, they often become Blood Brothers. Often source of Ho Yay.

Of course, if the rescuer is a Humble Hero, this is often followed by Think Nothing of It — which is usually ineffective.

Sometimes the saved person's attempts to make it up to the saver can be so annoying to them that they desperately try to find some way to get rid of them. This often overlaps with Disproportionate Reward, as they can see True Heroism in the smallest kindness.

Alternatively, the rescuer might take advantage of the debt that is owed by the rescued, milking the situation well past the point where a fair and reasonable person would consider the debt repaid. If this happens, look for the saved person to try and put the rescuer in danger specifically so he can cancel the debt by rescuing him. Another variant has the "slave" coming to discover that he actually didn't save the "slave-holder". This never ends well.

A standard plotline for single episodes would look like this:

Compare/Contrast: You Owe Me, when the rescuer invokes the debt instead of the rescued.