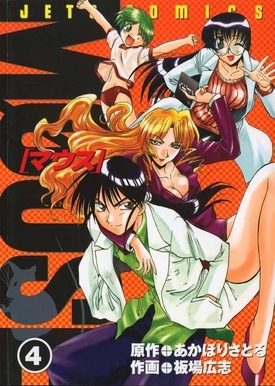 "There is nothing Mouse cannot steal."
Advertisement:

Mouse is a fourteen-volume Seinen comedy manga written by Satoru Akahori that got adapted into a 12-Episode Anime series of 15-minute episodes about the adventures of the Gentleman Thief Mouse and his Unwanted Harem of sex-slaves. In his civilian identity, Sorata Muon is a mild-mannered art teacher who is popular with his female students and gets bullied by his three colleagues- Mei, Yayoi and Hazuki. But in truth, he is the heir to a four-hundred-year-old dynasty of Phantom Thieves, and his female colleagues are actually his devoted assistants and live-in sex-slaves.

The series featured an extreme amount of fanservice, some truly awful puns, full-chapter shout outs, a general attitude of not taking itself very seriously and, beneath it all, an actual story. The fanservice was dialed down a lot in the anime adaptation.

Not to be confused with Maus.