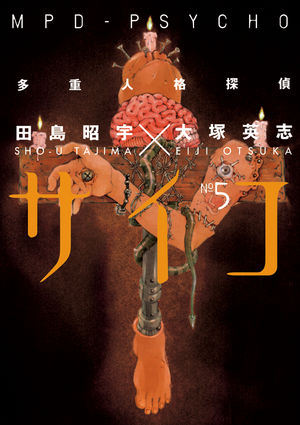 Warning — Here, there be nightmares.
"One of the others inside my head... Awakens. Another and another and... Who... Who am I...?"
—Yosuke Kobayashi.
Advertisement:

A Serial Killer is loose in the streets of Tokyo, one that delights in leaving the gruesome remains of his victims on display for the police to find. Yosuke Kobayashi, a dedicated young cop with Japan's major crimes task force known as Investigations Section One, has been working diligently to solve these horrendous crimes that have captured the media's attention. Lately, though, his dreams have been haunted by blood, darkness, and worst of all, visions of himself standing above the dismembered victims with knife in hand.

Pushing these dark thoughts aside, Yosuke focuses all of his time and energy (and his brilliant knack for criminal profiling) into finding the monster behind these attacks and putting a stop to them once and for all. The killer makes it personal, however, when his next target turns out to be Detective Kobayashi's girlfriend, the mutilated but still living body of whom the killer delivers directly to Yosuke's office. Enraged, Kobayashi finally manages to track down the psychopath who is responsible. When he finds the killer to be laughing and unrepentant, though, something within him breaks, and the man who once was Yosuke Kobayashi becomes something irrevocably different.

Several years later, the man known as Yosuke Kobayashi is about to be released on parole, having served out his sentence for the crime of criminal negligence in the cold-blooded killing of the lunatic that maimed his girlfriend. Ever since the killing and his subsequent arrest, he has gone only by the name of Kazuhiko Amamiya. Amamiya claims that he is an alternate personality of Kobayashi (who is a victim of Multiple Personality Disorder), and that the "Kobayashi" personality died when another, far more violent personality named Shinji Nishizono arose to take Kobayashi's revenge on the serial murderer.

Upon his release, Amamiya is recruited into a private criminal investigations firm: One that can make use of his unmatched profiling skills, and that seems more than willing to overlook his disorder. Serial murders are on the rise, more frequent and gruesome than ever before. With the dark whispers of Shinji Nishizono echoing in his mind, Amamiya and his firm aid the police in their investigations. Though the nature and method of each new murderer is different, and there is seemingly no relation from one to the next, Amamiya soon finds a connection. Each of the killers has a strange mark on the white of their left eye, just beneath the eyelid. A mark in the shape of a barcode...

The same kind of mark that is on Amamiya's own left eye...

MPD Psycho is a Psychological Horror / Detective Manga written by Eiji Otsuka (The Kurosagi Corpse Delivery Service) and illustrated by Shou Tajima (Kill Bill, Galerians). It was originally released in 1997, and and ran until 2016. It is licensed in North America by Dark Horse Comics. In 2002 the series received a six episode live-action miniseries adaptation, directed by controversial filmmaker Takashi Miike.