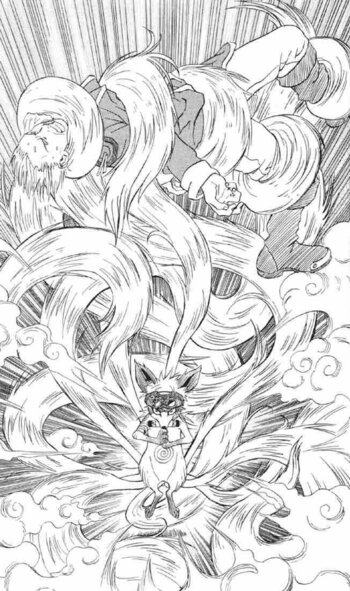 Naruto is an extremely well-known series about a 12 year old boy named Naruto Uzumaki and his desire to become the most powerful Ninja in his town. What's unknown to some is that the original concept didn't even involve ninja!

Sometimes referred to as "Chapter 0", the original pilot for Naruto debuted in a 1997 issue of Akamaru Jump. It is remarkably different from the final product. There are no ninja, none of the characters besides Naruto, the Nine-Tailed Fox, Teuchi (the Ichiraku Ramen guy), and a very early version of the 3rd Hokage appear, and the atmosphere is completely different.

The story begins with a backstory. Several years ago nine powerful men risked their lives to seal the famous and deadly giant Nine-Tailed Fox of Mt. Oinari. All but one perished in the attack. The surviving man took pity on the Nine-Tailed Foxes' son and took him in. This kit turned out to be Naruto Uzumaki. Usually living in human form, Naruto is a demon living amongst humans. Despite the peaceful relations between demons and humans, Naruto can't blend in with everyone else. He's a spoiled, bratty boy who causes nothing but trouble.

In order to stop Naruto from becoming a monster like his father, Naruto's guardian the Chief gives him the task of going into the nearby city and bringing back a friend. Naruto is forbidden from returning home until he makes a true friend. While in the city Naruto meets two artists: the friendly trainee Takashi Takano and his jaded drunkard teacher Kuroda. Naruto befriends Takashi, only for that night Takashi to be murdered. Naruto is framed for the murder. Naruto promises to find the real killer and spends the next week looking for him. He eventually finds the killer, brings him to justice, and gains the trust of Kuroda.

The oneshot ended up doing so well that two years later it was revitalized into a full-fledged manga. The rest is history.