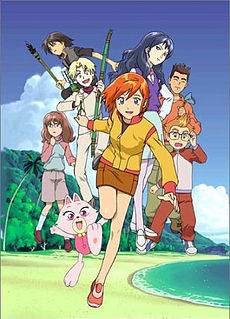 Also known as Uninhabited Planet Survive, or Planet Survival, Mujin Wakusei Survive is a 52-episode anime that aired on NHK from 2003 to 2004. The story is set in a distant future, where Earth has become uninhabitable, and therefore people live in colonies on the surrounding planets.

On a school field trip, a mistake causes the protagonist, a young New Transfer Student named Luna, her pet robot, and six of her classmates to be thrown through a gravity storm and crash land on a seemingly uninhabited planet. There, with Luna as their leader, the robot cat Chako, the Troubled, but Cute lone wolf Kaoru, the spoiled rich boy Howard, the shy Meganekko Sharla, the obedient Gentle Giant Bell, the prideful musician Ojou Menori and the young boy genius Shingo must fight for their survival, meeting a little alien child nicknamed Adam along the way.

This anime series contains examples of: