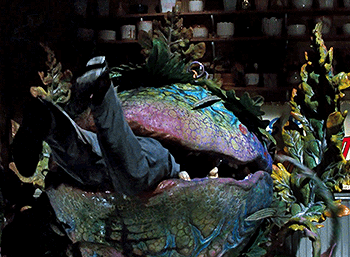 "In Skid Row, garden salad eats you!"
"This was a man-eating plant. If it had germinated, it would have required us just as much as we require green vegetables."
— Dr. Sheldon, The Avengers (1960s), "Man-Eater of Surrey Green"
Advertisement:

is one of the coolest plants out there: It's carnivorous! And it eats insects! Its leaves even resemble grotesque, tooth-lined mouths. How cool is that? Now let's enlarge the plant about 100 times, and give it a taste for people!

Of course, there are differences. For one, Man-Eating Plants don't just wait motionlessly for someone to step into their leaf—they can move and actively chase their victims (thankfully, they usually can't uproot themselves from where they grow). They also tend to growl and roar. Somehow.

Their leaves' resemblance to animal mouths also tends to get highly exaggerated — they might be dripping with saliva, be lined with actual razor-sharp teeth, or sport a tongue. Often, the plant's "mouth" is depicted as an elaborate, colorful bulb without any real parallels in real-life plant anatomy. In fact, while the real plant eats insects by trapping them within its leaves and digesting them, the Man-Eating Plant actually swallows its victims; its stalk seems to house an animal's full-scale digestive system.

Besides the main set of jaws, their attacks may include typical traits of fictional plants: entangling with rapidly-growing or mobile vines, spewing damaging or debilitating substances — Alluring Flowers are often depicting as feeding on creatures enthralled by their mind-numbing scents — or even spawning mini-copies of themselves that threaten to inflict a Death of a Thousand Cuts.

Unless they are sufficiently vulnerable to normal attacks (although they typically take LOTS of ammo to kill this way), expect them to be fought by means used against plants in Real Life (or just take much more damage from them): cutting tools, weedcutters, pesticides, fire (or even napalm) or acid (they might instead attack with acid themselves). While doing this, a hero may be cracking snarky gardening-themed remarks.

Other varieties of carnivorous plants

don't show up anywhere nearly as often. This is partially because they're not as well-known and don't sport that awesome carnivore-like appearance; what's more, their trapping mechanisms tend to be more passive — making them little more than living flypaper or a Pit Trap, which doesn't make for an exciting monster.

sometimes gets depicted‎ as this, though in Real Life it's a non-insectivorous root parasite (which incidentally makes it more like a herbivorous plant than anything else).

Ice Age 3: Dawn of the Dinosaurs features one big enough to eath both a mammoth and a Smilodon. It manages to release them after Buck is just barely able to cut the blue root.

Ice Age 3: Dawn of the Dinosaurs features one big enough to eath both a mammoth and a Smilodon. It manages to release them after Buck is just barely able to cut the blue root.