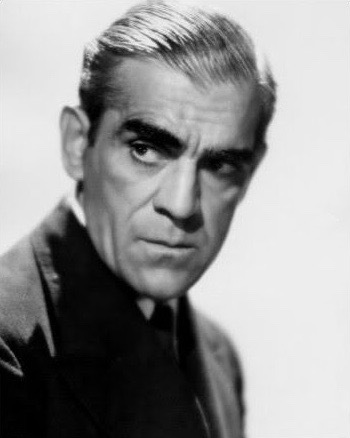 "When I was nine I played the Demon King in Cinderella and it launched me on a long and happy life of being a monster."
"I'm not so sure I want to be down in the cellar with him. Look at that puss. He looks like Boris Karloff."
— Officer Klein in Arsenic and Old Lace, regarding Jonathan Brewster, who was originally played by Karloff himself
Advertisement:

Born William Henry Pratt, Boris Karloff (23 November 1887 – 2 February 1969) was a much-beloved English character actor who worked in a variety of genres and whose career spanned fifty years (albeit all too often in films that were criminal wastes of his talents). He is most remembered, however, for his work in horror films (most particularly the Universal Horror cycles of the 1930s and '40s), in which his distinctively gaunt, heavy-browed appearance and sinister lisping voice were a definite advantage.

He was born as the youngest of nine siblings in Surrey (now London), England. Most of his brothers went into higher education and eventually all got jobs at different levels of the British diplomatic corps, and the young William was originally set to follow in their footsteps, studying for a time at King's College London; but he eventually dropped out of university and instead journeyed across the Atlantic to Canada, where he occasionally worked as a farm labourer and did various odd jobs until happening upon acting. As he started acting in different theater troupes, he adapted his stage name of "Boris Karloff". From the stage, he drifted into acting in film as the new medium started gaining popularity, and eventually he ended up in Hollywood, where he acted in bit parts for years. Finally, at the age of 44, he had his major breakthrough as an actor, when he played the Monster in the 1931 version of Frankenstein. Karloff proved to be the breakout role of the film, and he since reprised the role several times, most notably in Bride of Frankenstein and Son of Frankenstein.

Among his other more famous roles are: the resurrected Egyptian villain Imhotep in The Mummy (1932), and supplying the narration for the classic Chuck Jones adaptation of How the Grinch Stole Christmas!. In 1939, he appeared in the original run of the play Arsenic and Old Lace as a man whose plastic surgeon had watched too many horror movies; he was unable to appear in the film version because, ironically, his play contract had not yet run out.

His career in films waned somewhat in The '50s and Sixties, as he was reduced, more or less, to playing caricatures of himself in films such as Abbott and Costello Meet Dr. Jekyll and Mr. Hyde (1953) and The Ghost in the Invisible Bikini (1966). One of Karloff's biographers believes that he was gray-listed during this time as a result of his involvement in the Screen Actors Guild. He found more fulfilling work on television in this period; he starred in the series Colonel March of Scotland Yard, hosted (and sometimes acted in) the horror anthologies Thriller and The Veil, and guest starred on series such as The Girl from U.N.C.L.E. (in drag!), The Wild Wild West and Route 66.

Nearing the end of his career and life, he achieved a personal Crowning Moment of Awesome in the Peter Bogdanovich nail-biter Targets, playing... Byron Orlock, a veteran horror-movie actor nearing the end of his career and life. An earlier Real Life Crowning Moment Of Awesome occurred in Regina, Saskatchewan, in 1912, when as an unknown actor in a travelling theatre troupe he led fundraising efforts to help the victims of a devastating tornado— and ended up raising more money for the victims than the federal government.

Karloff was married six times, and had one daughter by his fifth wife. He died of pneumonia in 1969, at the age of 81.

In an ironic twist that the actor surely would have appreciated, for more than a decade after his death he continued to entertain readers of the eponymous Boris Karloff Tales of Mystery comic book from Gold Key/Western Comics as he was depicted introducing each issue, Rod Serling-style, becoming a Posthumous Character. His voice has enjoyed a similar afterlife; referenced and parodied so often over the years that, much like that of Peter Lorre, it now exists independent of him. Arguably the most notable examples are the kitch classic song "The Monster Mash" and the iconic, "They're coming to get you Barbara!" from Night of the Living Dead. With that, and How the Grinch Stole Christmas airing like clockwork every holiday well into the 21st century, it often comes as a shock to younger people to learn he died over a half-century ago.

Boris Karloff has appeared in the following works: