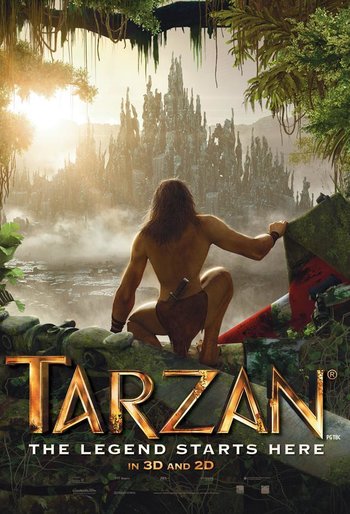 In this animated adaptation of Edgar Rice Burroughs' classic tale, John Greystoke, Jr. was just a toddler when he accompanied his adventurous mother and father on a journey into Africa in search of a mineral that could revolutionize the energy industry. That trip turns tragic, however, when their helicopter crashes in a race to escape a massive storm, leaving young John the sole survivor. Raised from that day forward by a motherly gorilla named Kala, the boy, now named Tarzan, quickly integrates into the family of primates. But alpha male Silverback Tublat refuses to accept Tarzan's presence, viewing him as a direct threat to the clan. Nearly a decade later, Tarzan encounters beautiful Jane Porter, and begins to long for human contact. When Jane returns to the jungle accompanied by smooth-talking entrepreneur William Clayton a few years later, her relationship with Tarzan is rekindled. But while Clayton has ostensibly come to the jungle to support Jane's conservationist endeavors, he's actually searching for the very same energy source once sought by Tarzan's father, and hopes to turn a tidy profit by exploiting the precious resource. The situation turns critical when Jane recognizes Clayton's true intentions, and the only one who can save her from both the villainous industrialist and the menacing Tublat is the noble Tarzan of the apes.