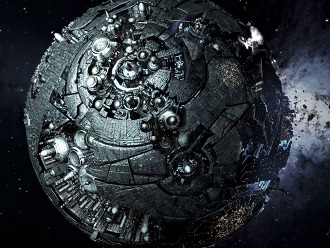 A city planet is a subtrope of Absurdly Cool City, Mega City, and Single-Biome Planet, because you just took an entire planet and made the entire planetary biome a single city. In other words, this is what happens when someone takes Planetville a little too literally: there is only one "city" on the planet, and it covers the entire planet.

Sometimes referred to as a planet city, world city (though "world city" has also been used to mean other things), completely urbanized world, omniopolis / omnopolis, or ecumenopolis.

While most examples are recent, the concept dates as far back as the nineteenth century work of Thomas Lake Harris

, and the term "City Planet" dates at least as far back as the first draft of the script for Star Wars: A New Hope.

This trope occurs as the apparent result of a civilization, presumably over centuries or millennia of expansion, converting the entire surface of a world into one vast city. To be sure, many City Planets are divided into "administrative sectors" or other such local government institutions to keep order manageable, but effectively it's all the same city. Generally, this trope implies that the only biome of importance on the planet is urban jungle. Taken to an extreme, it may be implied the locals even paved over volcanoes and oceans in the process of creating the City Planet.

In works not all the way to the less realistic end of the Sliding Scale of Realistic vs. Fantastic, such a world can present a Mega City-sized ball of Fridge Logic. After all, what do people eat if there is no farmland? And wouldn't so much urban space all over the planet heat it up until the point of ending all life?note Cities in Real Life tend to build up a lot of heat for a variety of reasons. This phenomenon is called an urban heat island

, and the only reason why it hasn't killed us all yet is because while cities generate a lot of heat, there's a lot of unpopulated countryside for that heat to escape to and linger in while it patiently waits for its turn to radiate off of the planet. If all countryside were to disappear, however...Often it's simply handwaved, but other times it's revealed that:

Because Sci-Fi Writers Have No Sense of Scale, City Planets tend to have implausibly low populations, even if the number quoted seems high. Assuming a city literally covered the surface of a planet the size of the Earth, with no large bodies of water or other uninhabited areas, a population of 1 trillion would have a density of around 5000 people per square mile, or five times smaller than that of New York City (and fourteen times smaller than Manhattan). Considering that such sci-fi cities are often said to have multiple levels as well, either fair portions of this "global city" must be largely empty or the planet must have a population density equivalent to that of a rural town. Even assuming that the census data is off doesn't work as you would run into problems overheating the planet once you got past 10 trillion people, still far below having to give people less than 1000 square feet of living space, much more than the cramp conditions shown in most science fiction.

Alternately, the trope will be subverted, introducing the audience to a seemingly endless city, and only later revealing that there are, in fact, vast areas of truly rural or wilderness areas remaining, the locals just don't like to talk about it.

Another subversion can be that the city, despite covering an entire world, is no bigger than an "ordinary" city — because the planet is so small. In the past, such stories seemed more realistic than they do today; however, many serious hard — Sci-Fi tales involve colonizing an asteroid or a city-sized space station. In recent decades, computer image manipulation technology has resulted in these occasionally showing up in video games or humorous images.

Finally, in some settings, a city occupies not a planet, but an entire plane of existence, a layer of a Layered World, or other planet-like... thing.