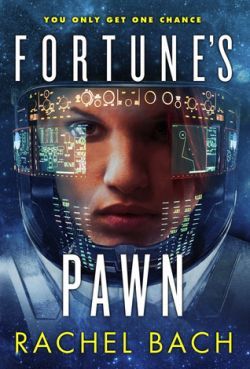 The Paradox Trilogy is a Science Fiction series by Rachel Bach.
Advertisement:

Deviana Morris is a mercenary who dreams of joining the Devastators, an elite guard of soldiers in Powered Armor who directly serve the Sacred King of Paradox. Since membership in the Devastators is invitation-only, Devi decides to beef up her resume with a tour of duty as private security on Captain Caldswell's freighter Glorious Fool. Glorious Fool has a legendary reputation as a cursed ship, getting into more trouble on the average freight run than most ships see in war zones, and surviving for one year under Caldswell is considered to be worth five years of any other military service. Devi doesn't believe in curses, and joins the crew of the Glorious Fool thinking it'll just be a job like any other. Then she meets the crew.

Caldswell, the captain, constantly changes course to meet with mysterious "clients" nobody else gets to meet. Basil, the navigator, is an insufferably superior alien who refuses to work for anyone but Caldswell. Nova, the sensor technician, is a psychic space-hippie. Hyrek, the doctor, is a former butcher turned surgeon and outcast from his race. Ren, the captain's daughter, rarely speaks and spends most of her time playing chess alone. Rupert, the cook is incredibly strong and unusually skilled at martial arts.

Against her better judgement, Devi can't help but investigate the mysteries surrounding the Glorious Fool's cursed luck and unusual crew. What she discovers thrusts her into the center of a conspiracy involving Eldritch Abominations which pose a threat to all life.