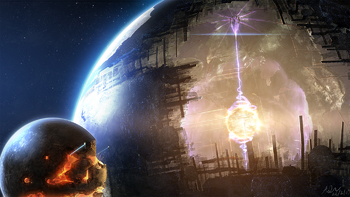 Image not to scale. note  i.e. It's huge. Image

"Imagine the energy crisis of a really advanced planetary civilization. They've used up all their fuels, they depend on solar power. An enormous amount of energy is generated by the local star, but most of the star's light doesn't fall on their planet. So perhaps, they would build a shell, to surround their star, and harvest every photon of sunlight. Such beings, such civilizations, would bear little resemblance to anything we know."
— Carl Sagan, describing the Dyson Sphere in a nutshell
Advertisement:

Big Dumb Object or Planet Spaceship not big enough for you? Look no further. Sci-Fi authors have made solar-system-sized artifacts into a trope of their own. A prime example to illustrate how Science-Fiction Writers Have No Sense of Scale.

The Trope Namer is physicist and mathematician Freeman Dyson,

who theorized in a 1959 scientific paper that, given the ever-increasing demand for energy typical of industrial civilization, Sufficiently Advanced Aliens might need to capture all the energy radiating from a star.

While Dyson himself originally saw his concept as a network of many separate orbiting habitats and solar power-stations, most media depictions show a single continuous solid sphere completely enclosing its star. This misconception is an acute case of Sci-Fi Writers Have No Sense of Scale. Constructing such an artifact would probably bring a civilization up to at least 2.0 on the Kardashev scale.

The technologies and resources needed to do it raise the question of whether a race that could build one would still need it. It has been estimated that constructing the sphere would require the energy equivalent of the lifetimes of several stars AND the raw materials of more than the entire solar system, which rather defeats the purpose of the initial construction.note But note that this is based on the assumption that the sphere has a radius of 1 astronomical unit (the distance between the Earth and the Sun). A smaller sphere would require less energy and materials to build.

The Ringworld concept was created by science fiction author Larry Niven as a mid-point between this and a true planet because, as Niven put it in his essay Bigger Than Worlds (a discussion of Ring World Planets, Dyson Spheres, and other possible macrostructures), "I like being able to see the stars at night". Something that a Dyson Sphere prevents.

This trope doesn't require an object to block all light from the star, but it does require construction on that scale. To be a Dyson Sphere, the artifact must:

In fiction, Dyson Spheres tend to be abandoned and uninhabited. If they are inhabited, the residents are usually not at a tech level capable of building the sphere. This is because, if your protagonists run into a sphere whose residents are in the full flower of their technological might, they and their petty problems promptly get overwhelmed.

See the Analysis page for more information about how such an object might work in the real world.

Subtrope of Hollow World. Compare Big Dumb Object and Planet Spaceship. Not to be confused with the Dyson Ball, which is part of a vacuum cleaner.