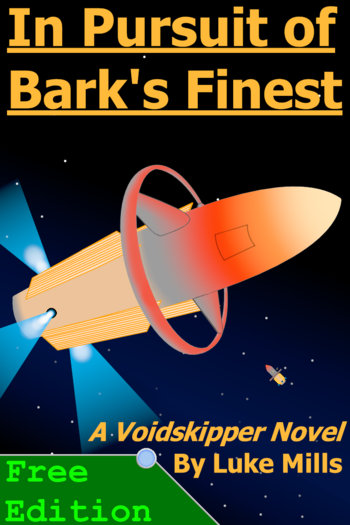 That's a pretty big spaceship
Voidskipper is the name for both a hard Science Fiction series, and the Faster Than Light starships found therein. The setting is heavily transhumanist and immense in scale, with everything within 7,000 light years of sol being heavily settled and no aliens to be found.
Advertisement:

The Voidskipper books are published using a somewhat atypical methodology, with free editions being released in installments on both Royal Road and Scribblehub. The full edition can be purchased at any time from either Amazon or Smashwords, which also buys access to some premium-exclusive bonus content.

As for the content of the books themselves, they're somewhat more action oriented than a lot of hard sci-fi. The science is definitely there and plays a major impact on the plots of the book, but at least most of the time this doesn't result in a long and tedious string of exposition.

At present there are two released Voidskipper novels:

In Pursuit of Bark's Finest is a story following Madeline Zargosty of the Red Star Union's military intelligence service as she hunts down some space pirates. You can find the free edition here

on Royal Road, or here

on Scribblehub. The free edition has links to the stores for the premium edition at the bottom of each chapter.

The Blackwood Tourney follows a young bio-engineer named Yures as they compete in a bio-engineering competition, having plenty of interesting encounters along the way. You can find the free edition here

on Sufficiently Munchkinned. The free edition has links to buy the premium edition at the bottom of every chapter.