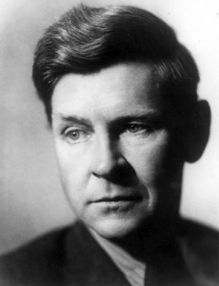 William Olaf Stapledon (10 May 1886 – 6 September 1950) was a British philosopher and academic who wrote a number of extremely influential Science Fiction novels in the early part of the Twentieth Century.

At a time when most SF was mainly focused on simple action and adventure, Stapledon wrote broad stories examining philosophical ideas based on the revolutions in science that were happening at the time. Although they were drenched in philosophy, they were written for a general audience, and were popular enough for him to become a full-time writer.

His first novel, Last and First Men (1930), is a broad study of the future history of mankind, and its descendants, covering millennia in its few pages. Its sequel, Star Maker, covered all of time and space. His most popular novel, Odd John was one of the first serious studies of what it means to be more than human.

Stapledon is credited with inventing the Dyson Sphere (Freeman Dyson admits he got the idea from Stapledon, and thought it should have been called a "Stapledon Sphere"). He was also one of the first writers to introduce the concept of Terraforming (although Jack Williamson is credited with naming it). His work has been cited as a major influence by many later SF writers, including Arthur C. Clarke, Stanisław Lem, and C. S. Lewis.