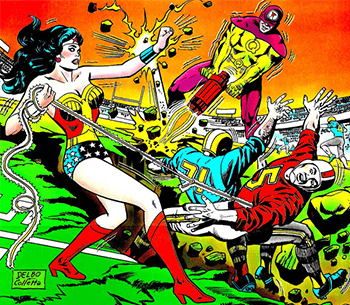 This is any device that is designed to cause some sort of seismic event. Usually, an earthquake.

Almost every Mad Scientist has at least one of these in his blueprint library, sometimes even two. Sometimes simply called the Earthquake Machine, or the Quicksand Generator, Liquefaction Array, or even Ruin Device. If it does the two things that all earthquake machines have in common, it will: 1) cause earthquakes as its primary function, 2) probably be a machine, although there are a few examples of this trope involving living creatures instead of machinery.

A modernized, although not necessarily more realistic take will probably depict such a machine as a Kill Sat or something along these lines. This is derived from conspiracy theories concerning HAARP

, some of which accuse the project of producing earthquakes for whichever nefarious purpose the NWO might have for them at the moment.

Occasionally overlaps with This Is a Drill. While a Colony Drop might cause an earthquake, and might very well involve a machine, the earthquake is simply a by-product of, well, a dropping colony. Compare Weather-Control Machine, which can be used to create similar chaos in the atmosphere instead of on the ground.

The traditional depiction is verging on Forgotten Trope; the jury is out whether the reimagined version makes it a Cyclic Trope.