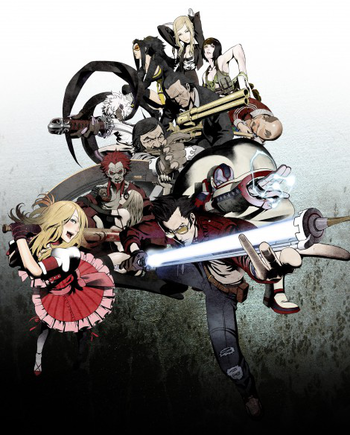 "Trust your Force, and head for the Garden of Madness!"
"I wanna be number one. How's that? Short and simple enough for ya? It's gonna be a long, hard road. But who knows? Could kick ass. Could be dangerous. Could totally suck. Whaddaya say bro, join me: let's see how far we can take this. And for you out there holding the Wii Remote/controller right now? Just press the A/○ (Circle)/START button... Let the bloodshed begin!"
— Travis Touchdown
Advertisement:

No More Heroes is the story of Travis Touchdown, a perennially-broke Occidental Otaku who wins a beam katana off of "an Internet auction site" and becomes a part-time assassin to pay for his otaku lifestyle. After taking a job from the mysterious Sylvia Christel, Travis unwittingly becomes the 11th-best assassin in the United States and decides to climb the ranks of the United Assassin's Association the hard way: challenging the ten assassins ranked higher than him, and taking them out one-by-one.

Developed by Grasshopper Manufacture and directed by Suda51, the mastermind behind the divisive Killer7, No More Heroes is simultaneously a celebration, parody and deconstruction of sandbox games, American geek culture, and the concept of an Anti-Hero. It juxtaposes the glamorous and high-octane battles of an assassin's lifestyle with the grim reality of a main character who lives in a motel room, roots through dumpsters for collectibles and needs to do menial labour to pay his U.A.A. fees. It gives you a Wide-Open Sandbox and a kickass motorcycle, but also the stark realization that the world Travis lives in is mostly empty and devoid of things he can actually affect; even running down pedestrians is completely ineffective. All that Travis has going for him is his delusional grandeur and self-image as a cool protagonist, and even that is slowly stripped away as the game presents him with the harsh truths of a professional killer, and the fact that his murderous rampage is fueled by nothing more than a shallow need for self-gratification.

That said, no game lets you rain down on Mooks like some sort of angry nerd god quite like No More Heroes.

It was given a remaster (No More Heroes: Red Zone Edition/Heroes' Paradise) for the Xbox 360 and PlayStation 3, exclusive to the latter in all regions except Japan, based on the belief that its poor sales were due to the Wii being unreceptive to this kind of game. This belief got a dose of reality when the game opened only a little better than the first game (on both systems), and sales legs dropped off even more quickly. Nevertheless, the game is an incremental step up from the original, featuring oodles of bonus content (including Bonus Bosses from No More Heroes 2) and gameplay tweaks (like allowing you to "stock" your special moves, which addressed the primary criticism of the original's semi-randomized Super Mode feature).

A sequel, No More Heroes 2: Desperate Struggle, was released on the Wii in 2010.

An Android and iOS entry in the series, titled No More Heroes: World Ranker, was released exclusively in Japan at the end of August 2012. This entry allows players to create their own beam-katana-wielding assassin and rise through the UAA ranks via missions, including fights with some of the notable bosses of both the main games.

In 2017, Suda announced that he would be directing a new game in the series for the Nintendo Switch, titled Travis Strikes Again: No More Heroes. In it, Travis gets trapped inside a video game alongside Bad Man, the vengeful father of Bad Girl, and together they must fight their way out. The game launched in January 2019, and it’s is the first game Suda has directed since the first No More Heroes. On October of the same year it received ports for both PC (via Steam) and Playstation 4.

At 2019's E3, it was announced during Nintendo's conference that Travis would be starring in a full-fledged No More Heroes III (as opposed to the smaller game that Travis Strikes Again was), to be released on the Nintendo Switch on August 27, 2021. As a leadup to III, the first two games were re-released digitally on the Switch on October 28, 2020. Furthermore, a Mii Swordfighter costume of Travis was released for Super Smash Bros. Ultimate on October 13, 2020.

Destroyman fools Travis into a feigned gesture of sportsmanship.

Destroyman fools Travis into a feigned gesture of sportsmanship.