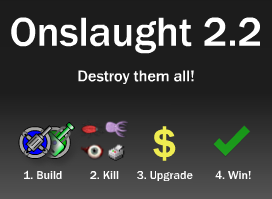 . In it, you face against hordes of random objects that are trying to attack the US Area 51 base.

What sets Onslaught 2 apart from most other Tower Defence games is the large number of "combos" that your towers can perform. Adjacent towers at maximum power can execute a combo that does a ludicrous amount of damage to a large group of enemies, making it a key strategy to defeating opponents. Furthermore, there are also other towers that help to boost the ability of your towers.