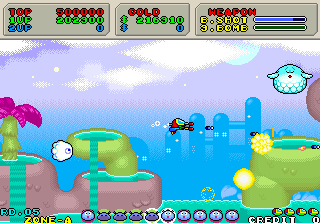 A sub-genre of Shoot 'em Up games, which replaces the spaceships, Starfish Aliens, robots and lasers with kittens, fairies, squirrels, candies, and all things Lighter and Softer. The stark space setting becomes Wackyland, and Moe Anthropomorphism abounds.

But the gameplay is otherwise intact, including the Nintendo Hard difficulty. Yes, despite the cutesy facade, these games are still very difficult, and need a lot of skill to beat (especially when they overlap with Bullet Hell). If you think otherwise, be prepared for a good smack in the face with Surprise Difficulty.

Sometimes these games have stories, and others just have an Excuse Plot, just like any other game.

Also, as with many Widget Series, this isn't considered that odd in Japan, since cute is seen more as an artistic style, rather than being considered strictly for young children. That means these games are rarely Guilty Pleasures. In fact, these games have found a solid niche among gamers.