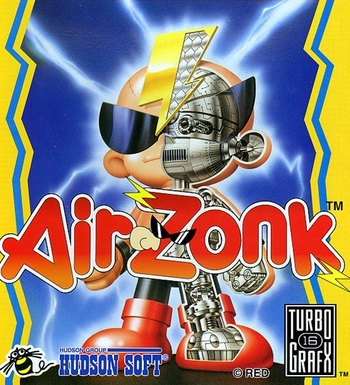 Air Zonk (PC Denjin in Japan) is a 1992 Spin-Off of Bonk, set in the distant future with Zonk, Bonk's sunglasses-wearing cyborg descendant.
Advertisement:

The series is a Cute 'em Up with a transformation gimmick. Zonk can merge with one of his teammates (or a small robot, depending on what game you're playing) to use unique weapons

Not to be confused with the trope Zonk, named after the deliberately shoddy prizes you could 'win' on Let's Make a Deal.