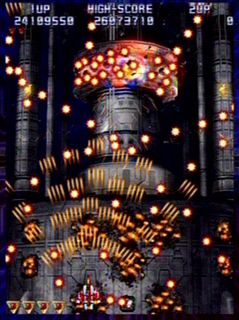 "Sometime in the future, Earth will be menaced by hordes of alien spacecraft that fly in predictable patterns and can be killed in one hit. The logical course of action will be to dispatch one brave hero in an untested plane/tank/spaceship to take them all on without help."
— Games Radar, "101 things we've learned from games"

A classic staple of The Golden Age of Video Games that has fallen out of favor in recent years. Everything is trying to kill you, and you have unlimited ammunition and a license to shoot first and ask questions later. Frequently, you're flying a Space Fighter or other aircraft, but other examples of the genre involve Dragons, Humongous Mecha, people walking(or flying) around with guns/bows or magic, abstract shapes, and so forth.

So popular were shoot 'em ups (and their close-combat cousin the Beat 'em Up) that many computer games magazines of the mid-late 80s took to jokingly appending "'em up" to whatever genre of game they were reviewing — puzzle 'em ups, platform 'em ups, quiz 'em ups and so on.

The term shmup is an abbreviation of "shoot 'em up", but is typically used by the fans who coined it to refer specifically to fixed-scrolling shooters that are not three-dimensional. For instance, 1943 would fit this description, whereas Geometry Wars would not (it is free-scrolling according to player movement), and neither would After Burner (it scrolls into/out of the screen in 3D). This kind of restrictive use is, however, debated among shoot 'em up fans

Power Ups typically increase the power and spread pattern of the primary weapon, which is usually fired continuously from the start of play until the end. Usually, a limited number of screen-clearing Smart Bombs are included to get the player out of a jam in a hurry. Many later games end their levels with a giant Boss Battle.

The actual shooting part can vary in complexity. It can be as simple as holding down the fire button and never letting go or it can be more complex either due to ship's low firepower (e.g. Space Invaders) , scoring systems required to watch what and when to shoot (e.g. Radiant Silvergun) or other reasons.

While Spacewar! is sometimes considered to be an Ur-Example, it's not a true shoot 'em up, but more of a one-on-one shooter. The Trope Maker and Genre Popularizer is Space Invaders, which is the first true shoot 'em up, with the player taking on multiple enemies that fire back. The Trope Codifiers are Galaxian and its sequel Galaga.

Like a platform game, shoot 'em ups have become popular with amateur game developers for their relative ease of development. While very few professional examples of the genre have been developed recently — for example Gradius V, which wasn't developed by series creator Konami.note (Although the company that worked on Gradius V was founded by former Konami employees.)

Today, shoot 'em ups in general suffer from terminal It's Short, So It Sucks!-itis from many critics. Most of these games are meant to be played in short bursts or in arcades, but if they are played entirely in one go, they would last no more than two hours at best. Worsening the decline is the redefinition of the term "shooter" — no longer used to refer to shoot-em-ups, they now refer to the distantly-related First-Person Shooter genre, or (merely) closer-related Third-Person Shooter.

Life in a Game spoofs them, specifically Star Fox, in Episode 4-2.

A Sister Trope to Rail Shooter.

Not to be confused with the movie Shoot 'em Up.

The Shoot 'em Up genre generally provides examples of the following:

Examples of this genre includes: