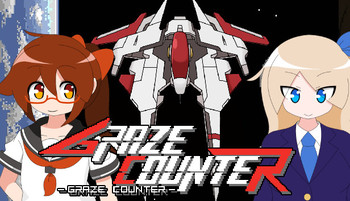 Graze Counter is a 2017 Doujin Shoot 'em Up developed by Bikkuri Software and published by Henteko Doujin. It is set in the early twenty-third century and revolves around an attempt by teenage fighter pilots Ginyose Uzuki and Furuyama Satsuki to liberate more than two million civillians who have been trapped in Cyberspace by the "virtual network" EDEN. They are joined by fellow teenage fighter pilots Katori Hayate and Kirisame Kiriko, who become playable after defeating them as Uzuki and Satsuki, respectively. It is distinguished from other Bullet Hell games by the titular mechanic: by grazingnote Passing as close as possible to enemy projectiles without touching them the enemy's bullets, the player can charge up a Wave-Motion Gun attack that destroys enemy bullets, causing them to drop stars that can be collected to charge up a secondary Limit Break called "break mode", granting enhanced firepower for a brief period.

It is available on Steam here