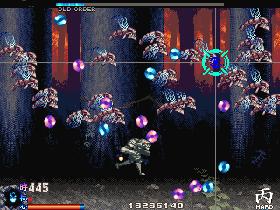 Iwanaga is a series of indie Bullet Hell Shoot 'em Up developed by uturobune (otherwise known as "buster", seemingly a different person from the creator of Meikyuujou Hydra and others). The original game, Kitan Iwanaga, was released back in 2007; it's free and can be obtained here

, is planned for a 2012 release, this time being a mix of Sin and Punishment and Ikaruga.

Gameplay is usually described as a combination of Alien Soldier and Sin and Punishment with a healthy dose of Bullet Hell. Each difficulty level is effectively a different game, or at the very least, has different bosses and stages in some parts while being of roughly equivalent length. A playthrough of Kitan Iwanaga's Hard difficulty by mrmonkeyman is viewable here

Long ago, there were two lineages from a goddess: one of flower, and one of rock. The children of rock called themselves the Old Order and tried to exert control. During the Showa Era, such stories were lost to myth, until a village was discovered with some interesting tales to tell. In particular, there were stories about a conflict near the location of a modern dam. This game shows what might have happened long ago...

The Iwanaga games contains examples of: