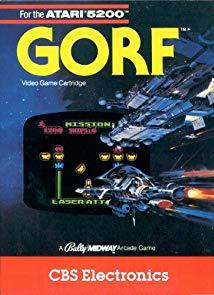 Gorf is an arcade game released in 1981 by Midway, whose name was advertised as an acronym for "Galactic Orbiting Robot Force" . It is a multiple-mission fixed shooter with five distinct modes of play, essentially making it five games in one: an innovation at the time, as other video games had a level to clear, only to have a different level that looked the same but was a bit harder. It is well-known for its use of synthesized speech, a new feature at the time.

Gorf's objective is to simply destroy all enemies. The player controls a spaceship that can move slowly left, right, up and down. (Its vertical movement is limited to the lower one-third of the screen.) The ship can fire a single shot (called a "quark laser" in this game), which travels slowly up the screen. Unlike similar games, where the player cannot fire again until their existing shot has disappeared, the player can "re-fire" their laser at any time, causing their existing shot to disappear immediately (if it hasn't already).

Gameplay is broken up into five distinct "missions", each one essentially a mini-game in its own rightnote The first is a direct clone of Taito's Space Invaders, which was released by Midway in the U.S.. The third doesn't even try to hide the fact that it's a clone of Namco's Galaxian, which Midway also released in the U.S.. Successfully completing all five missions will increase the player's rank and loop back to the first mission. The game continues until the player loses all of their lives. The player can advance through the ranks of Space Cadet, Space Captain, Space Colonel, Space General, Space Warrior, and Space Avenger, with a higher difficulty level at each rank. Along the way, a robotic, synthesized voice heckles and threatens the player, often calling the player by their current rank (for example, "Some galactic defender you are, Space Cadet!"). Some versions of Gorf also display the player's current rank via a series of lit panels in the cabinet.

Vague collision detection was a feature of the game intended to shorten the playing time - enemy shots that did not appear to actually impact on the ship object would still destroy it if they passed in close proximity.

Gorf is well-known for introducing or popularizing two new features (for its time) to the video game market. Its most notable feature is its robotic voice, powered by the Votrax speech synthesis chip (the same one featured in Wizard of Wor). Most games, even today, that feature human and robot speech use digitized voice samples rather than a speech synthesizer. Also, Gorf is one of the first games to let the player to buy additional lives before starting the game. Most games offer a predetermined number of lives (usually three) and allow the player to earn additional lives throughout the game. Gorf, which was usually set to offer two lives per coin, lets the player insert extra coins to buy up to seven starting lives.

Gorf was originally meant to be a tie-in with Star Trek: The Motion Picture, but when the game designers read the film's script, they realized that the concept would not work as a video game and changed its title. Even so, the player's ship bears a passing resemblance to the Starship Enterprise flipped upside-downnote The ship in Galaxian also slightly resembles the Enterprise, for that matter..

Gorf has examples of: