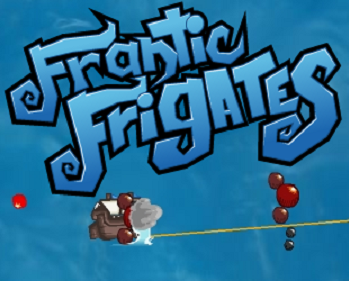 Frantic Frigates is online 2D Flash Shoot 'em Up made by Berzerk Studio, and released on August 26th, 2011.
Advertisement:

You play as a ship lost out at deep sea, on a mission to obtain as much treasure as possible - by destroying sharks, other rival ships and bosses, and by plundering the chests lost at sea. Use the treasures you have obtained to upgrade your ship so that it can hit harder, shoot faster, sail faster, increase the value of found loot, be able to attract treasures from a longer distance, have a greater capacity, and be more resistant to damage. How long will you be able to survive the onslaught from the continuously oncoming ships? Will you be able to plunder the treasures from the fabled ghost ships?

. It is also available for the iOS devices.