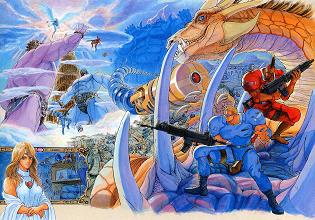 Forgotten Worlds (Lost Worlds in Japan) is a sci fi-themed shoot'em by Capcom, released for the arcades in 1988. Notable for being the first game to run on the CP System arcade hardware, which powered the majority of Capcom's subsequent arcade releases for the next few years. Forgotten Worlds makes use of a rotating control scheme known as "Roll Switch" that allows aiming at 18 possible directions, something of a novelty back then, as well as a system of supporting satellites that adds a large variety of different weapon options (from reflecting lasers to napalm bombs). These weapons are purchasable from shops that literally rise from the ground/walls, attended by a girl named Sylphie, using zennies collected from defeated mooks.

Set in the 29th Century, the story starts with a Galactic Conqueror and God of Evil and Destruction known as BIOS, who has created eight evil gods and gone on conquering and destroying worlds, turning them into husks of their former selves. Eventually, Earth is targeted and suffers the same fate, becoming a barren wasteland known as the "Dust World". The few humans that have survived decide to fight back by raising and training two boys into badass super soldiers. This works wonders, and the two now adult Nameless Soldiers embark on a quest to defeat BIOS.

The game was quite successful back then, getting ported to many consoles and home computers of the time, including the Sega Genesis (which had to cut a few things, like voiceovers and two stages) and later the TurboGrafx-CD (which removed two-player co-op, but included a bunch of bonus features). The main characters were also brought back somewhat reguarly in several of the company's Crossover games.