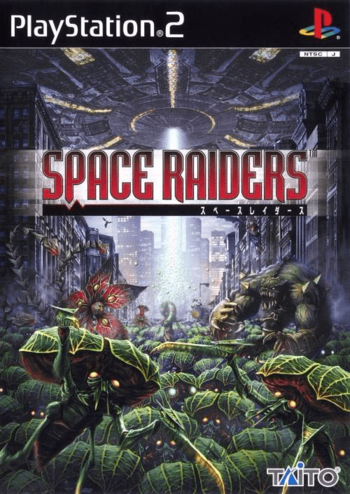 Not "everything" needs to be Bloodier and Gorier, Taito!
Advertisement:

Space Raiders (alternatively known as Space Invaders: Invasion Day) is a spin-off of Space Invaders released for the PlayStation 2 and GameCube, where the action in outer space from the classic games made it's way to earth itself.

Depicting a scenario where the aliens' invasion force do make it to earth, hordes and hordes of alien pods, released from their spaceships, crashes into an unspecified city somewhere in the United States. And from the pods, the aliens' army, consisting of giant insectoid mutants, plant-creatures, sentient blobs and heavily armed alien foot soldiers begins laying waste on humanity, slaughtering much of the populace.

Amidst the chaos, three unlikely survivors - a teenager named Justin, a fashion model named Ashley and a military sergeant named Naji who's the last surviving member of his squad - takes up arms and fights back.

Gameplay-wise, instead of piloting a ship like the arcade original, you're fighting the aliens on foot, from the ruins of the cities to the subways and hangars of an air field before infiltrating the mothership. Most of the action is depicted from a behind-the-back perspective (similar to old-school Run-and-Gun games), though instead of running forward, you're only allowed to run horizontally left and right while shooting at the alien horde.

The game was a flop that didn't do the franchise any favors, with subsequent entries of Space Invaders returning to the classic space-shooter format.

Not to be confused with a 1983 film by Roger Corman.

"You leave me no choice!"