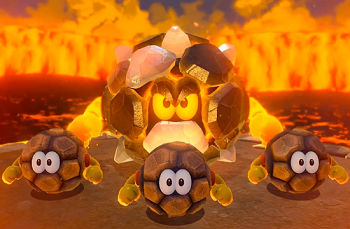 Can you guess which one's the boss?note Obviously, the small one in the center, because it's in front.
"I just hope they don't resort to enlarging the characters on the levels and calling them bosses this time; that giant beaver was a pretty cheap trick!"
— Cranky Kong, Donkey Kong 64 instruction manual
Advertisement:

This is where a boss enemy resembles an enlarged or Palette Swapped version of a regular enemy, possibly with a crown or some other identifying feature. They may even be a mutant version, and will probably have an unimaginative name based on the enemy type they resemble.

However! Their attacks may be vastly different from those of the enemies they are based upon, or they may be identical but stronger. This mook is usually one of the varieties that can turn red, causing the player extra pain.

King Mook tends to be such by virtue of being Large and in Charge. He may be the result of a Mook Promotion, or he may always have been tougher than your average enemy character. The King Mook has a high chance of being a Flunky Boss, having several of its weaker forms fight alongside it. It could be a Mechanical Monster if the original Mecha-Mooks it's based on are weird looking enough.

Compare Giant Mook. See also Elite Mooks and Superpowered Mooks. Contrast Monster Lord, when this is due to biology. Not to be confused with Flunky Boss, which is about a boss that relies on his army to do the fighting for him.