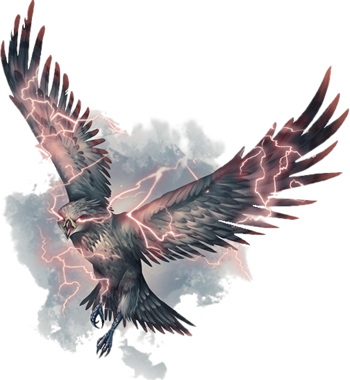 Thunderbirds are immense avian creatures, typically resembling birds of prey, with a connection to or control over storms and lightning. Their powers generally revolve around storm-focused Weather Manipulation, but may also revolve around a broader form of Shock and Awe with less focus on inclement weather but including phenomena, such as electromagnetic pulses, not associated with angry skies.

The most common depiction of thunderbirds is based on creatures found in the mythologies of various Native American peoples, which are typically depicted as large, powerful and noble beings that live in the sky and battle against entities of the water and the underground. Broadly similar creatures have arisen in other cultures as well, but the North American kind is generally the one most likely to influence their modern portrayals.

Alternatively, thunderbirds are sometimes derived from simply associating birds (the animals most commonly emblematic of the heavens and the sky) with thunder, lightning, and storms (the most dangerous and dramatic phenomena to manifest in the sky).

They may sometimes be contrasted with or compared to phoenixes when these are treated less as birds who periodically immolate themselves and more as actively pyrokinetic creatures. Lightning/Fire Juxtaposition is likely a factor in this.

Not to be confused with the series Thunderbirds, or with the Mozilla email client.